I was unsure if people care enough to make an effort. I planned to join the April 7 March to Save South Africa from the Cape Town Town Hall to Parliament the next day.

Arriving in town we could see things were different. We walked past the Market in St Georges mall and saw almost no one there. 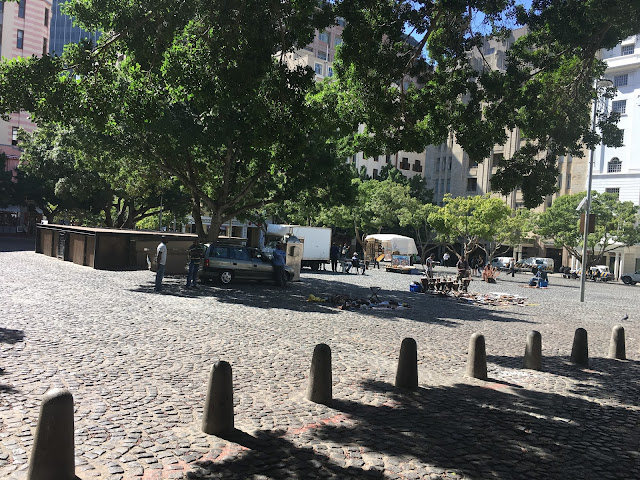 As we carried on walking towards the Grand Parade we heard first the motorbikes, then the people. Even though it was not yet noon, the crowd that had gathered was substantial, a lot more than the legal limit of 8,000.

I looked up the street and then realized that the crowd was very large, my insecurity that no one cared enough to make an effort seemed like a joke.

In the 80s I joined a few marches while at varsity. Two things I feel are worth nothing. Firstly, in the 80s the racial mix was different. While it was a majority of white people, it had more representation from our rainbow nation to be. This time the rainbow was there but some of the colours where under represented. Secondly, the marches of the 80s had a far more intense emotional charge.

Perhaps it is me, I am 30 years older now and probably a lot grumpier. However, while these marches both represented a rising of civil society against an injustice, emotional charge is muted. Is this because the gathering feels less empowered or is it perhaps that the injustice being protested against is more logical than emotional.

No matter who you are in South Africa you have an emotional connection with the ANC. For the majority of South Africa this a committed relationship with a long history.

Looking at the law of the land, specifically the constitution and the labour law. We can see the people currently representing the ANC appear to have no regard for either.

If any company in South Africa fired an employee the way the ANC has been firing their ministers, the CCMA would be licking their lips to sort out a settlement. It is against our own labour law to be this reckless.

If a public traded company did not produce results - the way, the ANC has in the last almost decade has not, the shareholders would have taken the board to task.  The share price would have dropped dramatically and the company may have had to file for bankruptcy. This has happened financially to South Africa first slowly with the rand, and then the ratings agencies have now stated we are an investment risk.

However, the emotion charge associated to the ANC is what has and will carry them through. The emotional attachment is so strong that like a lover that has been cheated on, they will be forgiven, until they go too far.

For each member of the South African public their limits are their own. The level of emotional investment for each individual is different. At the moment all the ANC has left is the peoples' emotional attachment that is unable to see the reality of a party that has turned their back on their own charter.

In 1994 President Mandela at his inaugural address, spoke these words of supreme intelligence:

“never, never and never again shall it be that this beautiful land will again experience the oppression of one by another, and suffer the indignity of being the skunk of the world.”

We are suffering the indignity of being the skunk of the world.

Unknown said…
@Jenny I agree, and the numbers that showed up are the real message of hope.

By Unknown May 01, 2012
When I first wrote my early Access system I used a function I setup in Outlook and then I called that. On upgrading I had a few problems with the older method then I found some help on the MSDN website here... and the related video. The first thing to do before starting the code is go into access, access the VBA (press Ctl+G) then click on "Tools" The "References" and then make sure you scroll down to "Microsoft Outlook ..." the version there will be determined by what version you have installed. This the code that I ended up with after looking at the site above Private olApp As Outlook.Application Private olNameSpace As Outlook.NameSpace ' The basics of this from MSDN site ' http://msdn.microsoft.com/en-us/library/ee208547(v=office.12).aspx Private Sub InitOutlook()  ' Initialize a session in Outlook   Set olApp = New Outlook.Application   'Return a reference to the MAPI layer   Set olNameSpace = olApp.GetNamespace("MA
Post a Comment
Read more